Cancer has become one of the main leading causes of morbidity and mortality worldwide. One of the critical drawbacks of current cancer therapeutics has been the lack of the target-selectivity, as these drugs should have an effect exclusively on cancer cells while not perturbing healthy ones. In addition, their mechanism of action should be sufficiently fast to avoid the invasion of neighbouring healthy tissues by cancer cells. The use of conventional chemotherapeutic agents and other traditional therapies, such as surgery and radiotherapy, leads to off-target interactions with serious side effects. In this respect, recently developed target-selective Antibody-Drug Conjugates (ADCs) are more effective than traditional therapies, presumably due to their modular structures that combine many chemical properties simultaneously. In particular, ADCs are made up of three different units: a highly selective Monoclonal antibody (Mab) which is developed against a tumour-associated antigen, the payload (cytotoxic agent), and the linker. The latter should be stable in circulation while allowing the release of the cytotoxic agent in target cells. The modular nature of these drugs provides a platform to manipulate and improve selectivity and the toxicity of these molecules independently from each other. This in turn leads to generation of second- and third-generation ADCs, which have been more effective than the previous ones in terms of either selectivity or toxicity or both. Development of ADCs with improved efficacy requires knowledge at the atomic level regarding the structure and dynamics of the molecule. As such, we reviewed all the most recent computational methods used to attain all-atom description of the structure, energetics and dynamics of these systems. In particular, this includes homology modelling, molecular docking and refinement, atomistic and coarse-grained molecular dynamics simulations, principal component and cross-correlation analysis. The full characterization of the structure-activity relationship devoted to ADCs is critical for antibody-drug conjugate research and development. 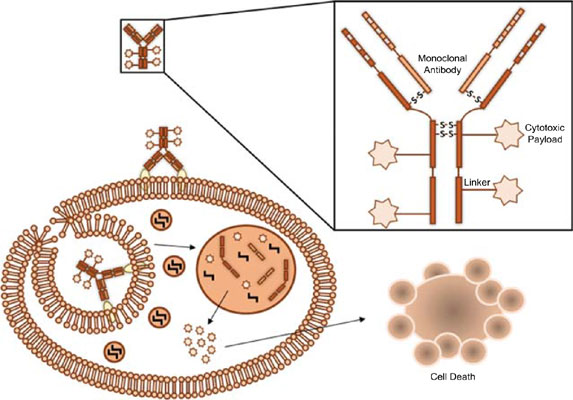