Alzheimer's Disease (AD) is a single major cause of dementia in middle to old age individuals involving several different etiopathological mechanisms that are yet to be properly characterized. Major invariant and characteristic features consist of the progressive cerebral deposition of the Amyloid β-protein (Aβ) and the neurofibrillary degeneration through Neurofibrillary Tangles (NFT) formed by hyperphosphorylation of the tau proteins in the regions of the brain that deal with memory and cognition. There are at least five subgroups of AD that can be identified by determining Cerebrospinal Fluid (CSF) levels of Aβ1-42, tau and ubiquitin. This multifactorial nature of the disease thus demands promising approaches for the development of rational disease-modifying drugs. A large number of agents have been discovered against individual targets but the success rate is very low and the number of compounds progressing to regulatory review is among the lowest found in any therapeutic area. A very promising modern approach solicits the design of Multi-Target-Directed Ligands (MTDLs) based on the “one molecule multiple targets” paradigm that has been specifically adopted for the treatment of disorders with complex pathological mechanisms. AD is one such disorder in which MTDL has found applicability. This review aims at providing an overview of the research carried out in discovering more efficient treatment against AD using MTDL, with a goal to ascertain safer drugs. 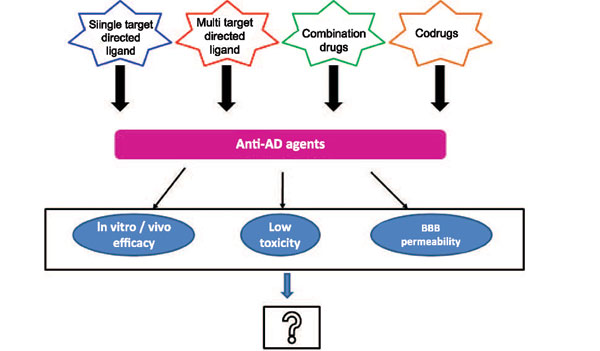