The Role of Metabolizing Enzymes and Transporters in Antiretroviral Therapy


Patients with human immunodeficiency virus (HIV) receive antiretroviral therapy (ART) through the use of antiretroviral drugs. A combination of at least three drugs that suppress HIV replication is used as standard treatment, and this is often called “highly active antiretroviral therapy” (HAART). Virus resistance is less likely when three or more drugs are used. A complication of anti- HIV drugs has a complex pharmacokinetic profile which is involved with extensive metabolism and transport by drug metabolizing enzymes (e.g., CYPs, SULTs and UGTs) and transporters (e.g., ABC and SLC). Severe drug-drug interactions (DDIs) can occur with combinations of antiretroviral drugs and this can lead to treatment failure or drug-induced toxicities. Previous reviews have focused on the role of CYPs and ABC transporters with use of antiretroviral drugs and their contributions to DDIs. In this review, we systematically and comprehensively explain the roles of enzymes (including CYPs, UGTs and SULTs) and transporters (including ABC and SLC) on all antiretroviral drugs listed on the FDA’s website. We also identify the DDIs that have been shown to be clinically important and associated with drug metabolism and transport alterations. Furthermore, we discuss herb-drug interactions that have been shown with long-term HAART when an herb is used to reduce side effects. 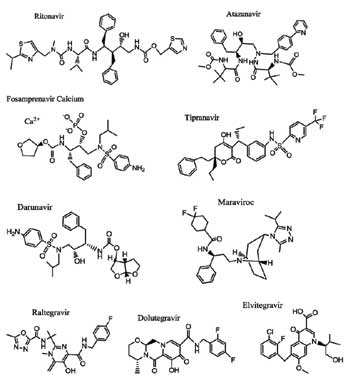