The connection of microbial biosynthetic gene clusters to the small molecule metabolites they encode is central to the discovery and characterization of new metabolic pathways with ecological and pharmacological potential. With increasing microbial genome sequence information being deposited into publicly available databases, it is clear that microbes have the coding capacity for many more biologically active small molecules than previously realized. Of increasing interest are the small molecules encoded by the human microbiome, as these metabolites likely mediate a variety of currently uncharacterized human-microbe interactions that influence health and disease. In this mini-review, we describe the ongoing biosynthetic, structural, and functional characterizations of the genotoxic colibactin pathway in gut bacteria as a thematic example of linking biosynthetic gene clusters to their metabolites. We also highlight other natural products that are produced through analogous biosynthetic logic and comment on some current disconnects between bioinformatics predictions and experimental structural characterizations. Lastly, we describe the use of pathway-targeted molecular networking as a tool to characterize secondary metabolic pathways within complex metabolomes and to aid in downstream metabolite structural elucidation efforts. 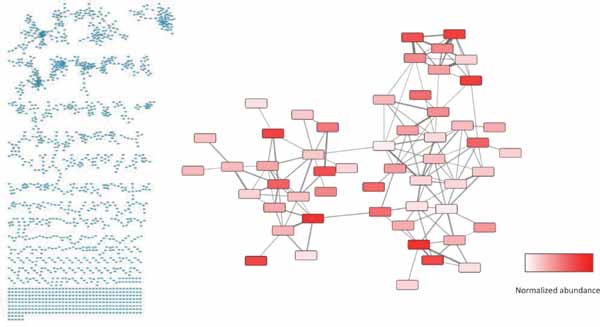