Alzheimer’s disease is a devastating and invariably fatal neurodegenerative brain disorder with no cure. AD is characterized by two pathological protein deposits, the senile plaques composed mainly of amyloid-β (Aβ) peptide and the neurofibrillary tangles which are bundles of paired helical filaments (PHF) of protein tau. In addition, oxidative stress, disorders in signal transduction and metal ions dyshomeostasis also play significant roles in the development of AD. A large body of studies suggests that selenium (Se), either as Se-containing compounds or as selenoproteins, may be beneficial in reducing Alzheimer’s pathology. Se is involved in most of the molecular pathways that are important in the progression of AD. We reviewed the literature regarding Se and AD and discussed the roles and mechanisms of Se in AD, as well as the potential of Se in AD prevention. 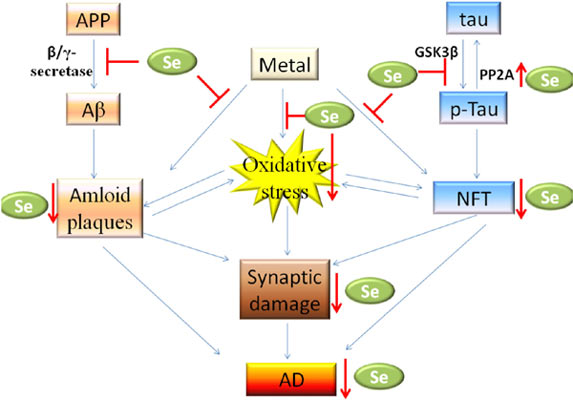