Cardiovascular diseases (CVDs) are the major health concern and the leading cause of death. Imbalance between free radicals and anti-oxidant defence is associated with cellular dysfunctions leading to the pathophysiology of various diseases including cardiac and vascular diseases. The stress responsive transcription factor NF-E2-related factor 2/antioxidant response element (Nrf2/ARE) regulates the expression of many detoxifying genes. Nitric oxide (NO) produced by endothelial nitric oxide synthase (eNOS) is an important regulator of vascular function. Involvement of NO in modulating Nrf2 signaling is well established. Thus, it is apparent that increasing NO bioavailability and antioxidant status in vascular and myocardial tissue can be considered as a potential strategy to prevent the onset of vascular dysfunction and CVDs and is therefore of therapeutical interest. Based on the marked protective effect of Nrf2/ARE signalling and intriguing links between antioxidant mechanism and endothelial derived NO, the aim of the present review is to compile conclusive evidence for the involvement of NO-Nrf2/ARE axis in the regulation of cardiovascular function. This review also discusses on improving eNOS and Nrf2 signalling by Nrf2 activators which holds promise for countering cardiac and vascular disorders. 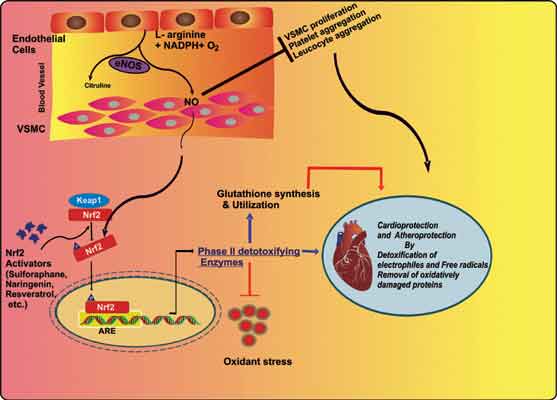