Indole alkaloids and synthetic indole derivatives are well known for their therapeutic importance. In fact, preclinical and clinical studies had already demonstrated several pharmacological activities for these compounds. Here, we overview the multifunctional potential of these molecules for the inhibition of enzymes related to neurodegenerative disease: acetylcholinesterase (AChE), butyrylcholinesterase (BChE), monoamine oxidases A and B (MAO-A and MAO-B). A focus will be given on Psychotria L. genus, considering its reported central effects. Finally, three Psychotria alkaloids, namely desoxycordiofoline (61), bahienoside A (64) and bufotenine (65), along with the synthetic indole derivatives (5S)- 5-(1H-indol-3-ylmethyl)imidazolidine-2,4-dione (66), 5-(1H-indol-3-ylmethyl)-2-thioxoimidazolin-4-one (67), 5-(1Hindol- 3-ylmethyl)-3-methyl-2-thioxoimidazolidin-4-one (68), and methyl 2-(aminoN-(2-(4-methylcyclohex-3-enyl)propan- 2-yl)methanethioamino)-3-(1H-indol-3-yl)propanoate (69), were evaluated in vitro regarding their interactions with AChE, BChE, MAO-A and MAO-B. It was observed that 66 and 68 were able to inhibit MAO-A activity with IC50 value of 8.23 and 0.07 μM. Molecular docking calculations were performed in order to understand the interactions between both ligands (66 and 68) and MAO-A. It was observed that the indole scaffold of both compounds bind into the MAO-A active site in the same orientation, establishing van der Waals contacts with lipophilic amino acids. Additionally, the hydantoin ring of 66 is able to interact by hydrogen bonds with two conserved water molecules in the MAO-A active site, while the methyl-thiohydantoin ring of 68 is within hydrogen bond distance from the hydrogen atom attached to the (N-5) of FAD cofactor. Taking together, our findings demonstrate that the indolyl-hydantoin and indolylmethyl-thiohydantoin rings might consists of good scaffolds for the development of new MAO-A inhibitors possessing neuroprotective properties. 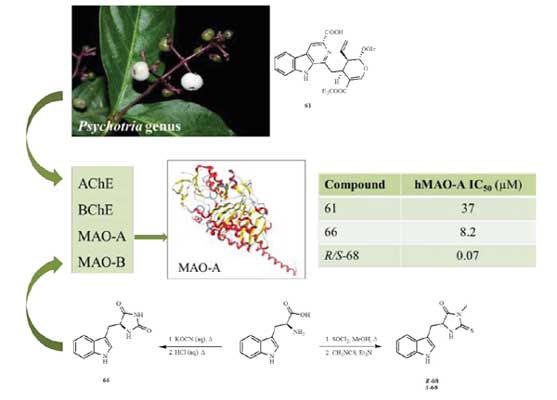