Methods: Two different UPLC-DAD methods were used for the quantification of eight selected phytochemicals from the alcoholic stem extracts of T. cordifolia accessions. The Waters Acquity UPLC system hyphenated to the QTOF micromass system, equipped with PDA and ESI-Q-TOF detectors was utilized for the quantitative analysis, Mass Lynx v 4.0 software was used for data analysis.

Results: Significant quantitative changes were observed in the analysed secondary metabolites among different accessions of T. cordifolia. The triploid (3x) cytotypes revealed higher amounts of seven out of eight analysed secondary metabolites than diploids and only 20β-hydroxyecdysone was observed to be present in significantly higher amount in diploid cytotypes. Further, at the tetraploid level, novel induced colchiploid (synthetic 4x) genotypes revealed increase in the yield of all of the analysed eight phytochemicals than their respective diploid counterparts. The quantity of active principles in tetraploid cytotypes were also higher than the average triploid levels at multiple locations in five out of eight tested phytochemicals, indicating the influence of ploidy on expression levels of secondary metabolites in T. cordifolia. Additionally, at each of the three ploidy levels (2x, 3x and synthetic 4x), a significant sex specificity could be observed in the expression levels of active principles, with female sex outperforming the male in the content of some phytochemicals, while others getting overexpressed in the male sex. The manifestation of diverse ecogeographies on secondary metabolism was observed in the form of identification of high yielding accessions from the states of Madhya Pradesh, Delhi and Himachal Pradesh and the Union territory of Jammu & Kashmir. Two triploid female accessions that contained approximately two- to eight fold higher amounts of five out of the eight analysed phytochemicals have been identified as superior elites from the wild from the states of Delhi and Madhya Pradesh.

Conclusion: The paper shows the first observations of ploidy specificity along with subtle sex and ecogeography influence on the expression levels of secondary metabolome in T. cordifolia. 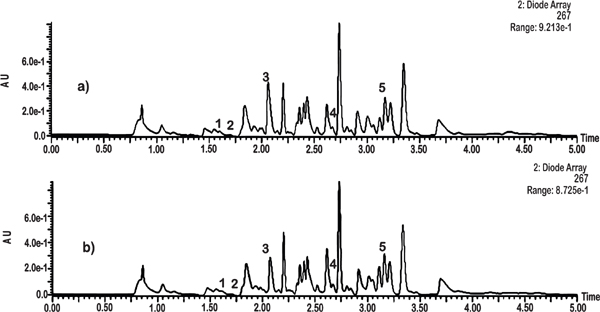