Objective: Neuroserpin is a serine protease inhibitor predominantly expressed in the nervous system functioning mainly in neuronal migration and axonal growth. Neuroprotective effects of neuroserpin were shown in animal models of stroke, brain, and spinal cord injury. Postmortem studies confirmed the involvement of neuroserpin in Alzheimer’s disease. Since altered adult neurogenesis was postulated as an aetiological mechanism for bipolar disorder, the possible effect of neuroserpin gene expression in the disorder was evaluated.

Methods: Neuroserpin mRNA expression levels were examined in the peripheral blood of bipolar disorder type I manic and euthymic patients and healthy controls using the polymerase chain reaction method. The sample comprised of 60 physically healthy, middle-aged men as participants who had no substance use disorder.

Results: The gene expression levels of neuroserpin were found lower in the bipolar disorder patients than the healthy controls (p=0.000). The neuroserpin levels did not differ between mania and euthymia (both 96% down-regulated compared to the controls).

Conclusion: Since we detected differences between the patients and the controls, not the disease states, the dysregulation in the neuroserpin gene could be interpreted as a result of the disease itself. 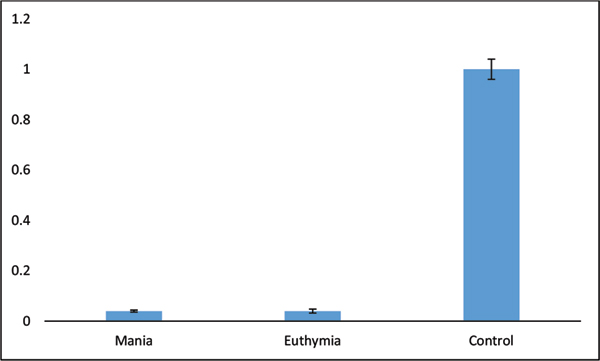