Conventional understanding of nitric oxide (NO) signaling in biology is commonly based on the premise that it simply diffuses randomly from its site of production by NO synthases to its site of action or inactivation. This notion has been challenged on a systemic cardiovascular scale with the realization that NO has endocrine effects despite being unable to exist in blood for more than a few milliseconds. Investigation of this phenomenon has led to the understanding that many of the chemical pathways that consume NO may not render it inactive as once thought. Instead, many of NO’s metabolic products are still capable of carrying out NO signaling, or participate in NO-independent signaling in their own right.

Nitrite and nitrate are two such products of NO metabolism that were once thought to be inert at physiological concentrations but are now known to contribute to NO bioactivity. The activity of nitrate is dependent upon its reduction to nitrite by bacterial nitrate reductase activity in the mouth. Nitrite can be reduced to NO by several metal-containing proteins under hypoxic conditions, or by nonenzymatic reactions under acidic conditions. Reduction and oxidation products of nitrite metabolism may also result in the production of NO adducts with a wide array of biological functions. The following review provides a general overview of the basic pathways underlying the physiological activity of nitrate and nitrite, as well as insight into the therapeutic potential of these pathways. 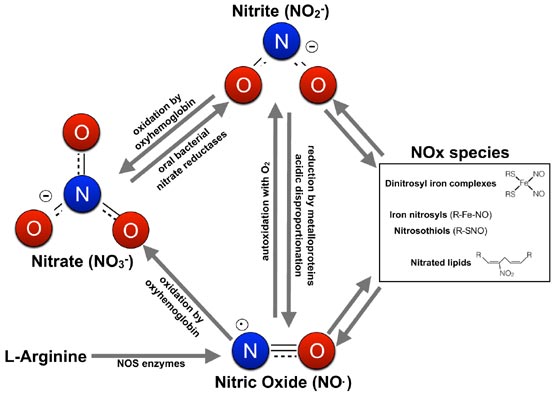